Each About Face Design Team member is thoughtfully chosen for the job based on the artists’ expertise and the particular needs of the client. This is the “secret sauce” or the “love & lipgloss” that has created happy clients who hire them on a repeated basis. The team is up to date in:

The award-winning team knows how to make you look your best and feel at ease during the process.

About Face Design Team’s motto is simple: “Professional service with a standard of excellence every time!”

Home to two of Orlando’s best, Kari Larsen and Gina Schmidt, the co-owners of the company. 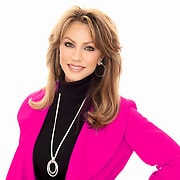 Kari’s passion to start the company in 1994 stemmed from a decision she made at a critical moment in her personal life. The term “About Face” is a military term meaning: a turn of 180° from the position of attention. It’s a complete, sudden change in position, direction, principle, and attitude. The decision was a pivotal moment that made a positive change in the course of her life and is forever reflected in the company name. With this life-altering decision of creating About Face Design Team, she saw that there were 2 major needs that AFDT would have to meet:

As a native of Florida, Kari’s award-winning designs in professional hair styling and makeup has helped wedding photographers, portrait photographers, and television producers win awards at the local and national level.

In 2004, after Kari met Gina, they decided to join forces and become business partners. Kari’s extensive experience with salon ownership, award-winning bridal editorial, and other print work coupled with Gina’s television production, live stage events, and corporate clientele made it the perfect combination for their businesses to merge and grow beyond anything they could have imagined. 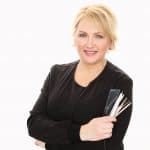 Gina is dedicated to helping women and men perfect their personal and professional image both on and off camera. Born and raised in Canada, the middle of 5 children, Gina has always had a passion for “all things beauty.” At the age of 6, the Avon Lady quickly became her hero when Gina was given a small trial size hot pink lipstick. She was hooked from that moment on.

At 19, she started her career as a facial specialist in her home town of Fredericton, New Brunswick. After developing her knowledge and skills in skincare, she later moved to Toronto and pursued another goal: To become a professional working makeup artist. Fashion Week was a huge turning point in her career when she had the opportunity to work backstage as a makeup artist. During her time in Toronto, she decided to also test the waters and try her creative hand at television makeup. Quickly, her skills and passion helped her decide to make this the focus of her career.

After moving to Central Florida in 1994, she wanted to further her education in television production so she traveled to Nashville, TN for an intensive hands-on course to train under the lead makeup artist for the Grand Ole Opry & TNN, the late Joyce Daniel Hill. This opportunity of a lifetime and working the live show was the training and catapult she needed to launch her full-time into all facets of television production work in Orlando, Florida. Gina quickly became sought after by several local and national television broadcasting networks and production companies. Her work with Golf Channel NBC for 15+yrs on live tournaments, covering the PGA and LPGA as well as many seasons of Golf Channel’s Big Break reality show took her work around the world.

She has worked in 8 different countries and has been entrusted with some of the world’s most famous faces in the music and entertainment industry along with high profile professional athletes, national sports and news broadcasters, and celebrities.

Gina also had the opportunity to be a key makeup artist for several tapings of NBC’s Ellen Show taped at Universal Studios Orlando, and has also worked with CNN, FOX Broadcasting Network, ABC TV’s local 9, and CBS TV’s local 6, to name a few.

Her latest training and addition to her portfolio is in microblading and micropigmentation permanent makeup.

She is especially focused on eyebrow mapping, shaping and design after witnessing the real struggles her clients were having with their eyebrow failure in fullness and shape.

Her advanced training at Nouveau Contour Academy in Orlando, Florida also included scalp pigmentation (helps the appearance of hair loss or thinning hairlines), derma pigmentation (the art of camouflaging body scars) and areola pigmentation (for those who have suffered loss through reconstructive or breast cancer surgery). Gina is now a part-time instructor at the academy as well.

Gina enjoys the diversity of her work and says it not only helps meet the needs of her clients but also keeps her on her toes and relevant in an ever-changing industry.

About Face Design Team believes in giving back to their community. It is not just about powder puffs, lashes and lip gloss. It’s a small company with a big heart and a lot of love 💖

They contribute to several local charities and have helped sponsor numerous charitable  organizations and events such as: